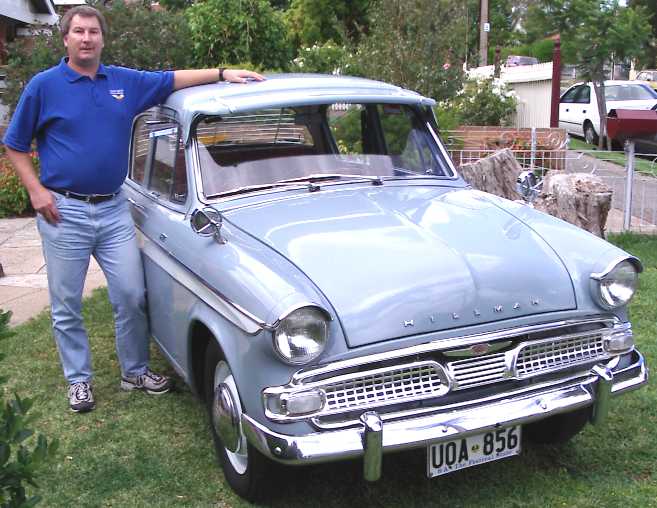 Exterior features which distinguish the Australian De Luxe from the ordinary "De Luxe" model (known as "Minx Series IIIC Special" in Australia) are :

This is a longer-than-usual list of De Luxe features, because Rootes Australia decided to make a hybrid of the Hillman Minx Series IIIC and Singer Gazelle Series IIIC.  During the Series Minx years (1956-1967), Rootes in the UK produced these 4-door saloons in 3 versions :

The Australian De Luxe model has an engine/chassis number commencing with AB7... which identifies it literally as a Singer Gazelle with the "Hillman" name (front and rear) and a Minx grille (which I think looks better than the Gazelle grille).  Like most (or all) other Minxes, these were assembled from CKD (completely knocked down) kits in their Fishermans Bend factory at the corner of Salmon Street and Williamstown Road, Port Melbourne. 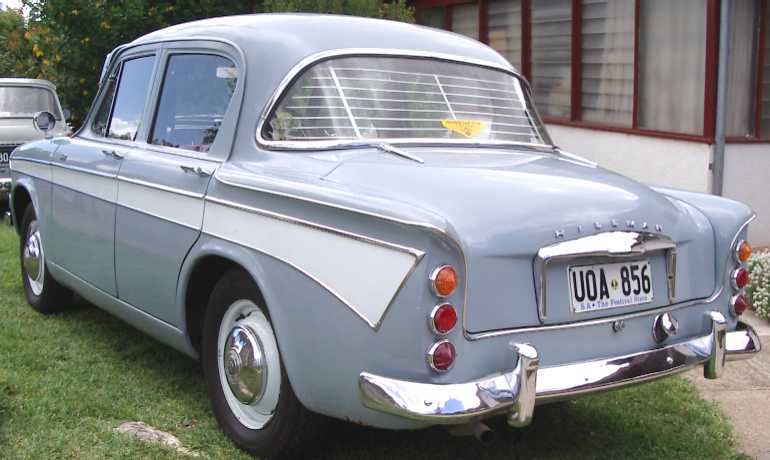 It's a normal boot for a Series Minx, but that rubber mat is the biggest one I've ever seen.  Earlier and later Minxes (and the 1966 Hillman Gazelle) had a mat which covered only the flat area above the petrol tank.
The Windsor Blue paint colour is most accurately seen here, due to the absence of direct sunlight during photography. 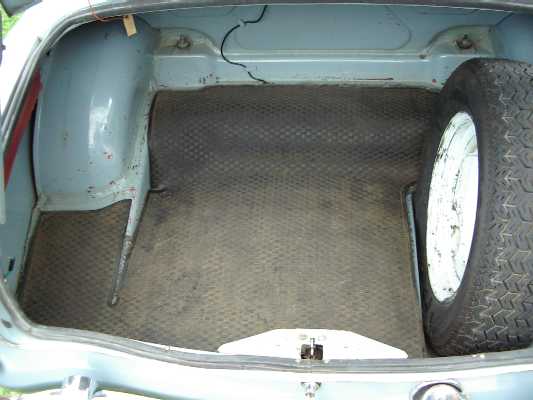 Each front door has the "1600" badge to denote the new 1592cc engine used in both the ADL Minx and Minx Series IIIC Special models.  56.5 bhp @ 4,100 rpm was the same as for the previous 1494cc engine (56.5 bhp @ 4,600 rpm).  However, my previous Minx Series IIIA had a flat spot mid-way through the rev range.  This does not occur with the 1592cc engine, which delivers torque strongly at low revs.
This car's previous owner, Ern Broughton felt that its acceleration was below par.  I initially agreed, although experience later revealed that's more of a feeling than what's measured with a stop watch.  During May 2003, I drove this car for 1053 miles on Ern's Rootes Tour of Australia, Stage 3½."  It held its speed well up hills, and returned good fuel economy  300 miles (480 km) touring range at 108 km/h (using 44.5 litres of petrol).  No mechanical problems were experienced.

Having worked on the Minx models immediately before and after this one (Series IIIB and Series V), I can make a few interesting observations under the bonnet.  The brake master cylinder seems to be a genuine replacement, as it has the larger reservoir used with disk brake systems.  This car is the last model with drum brakes up front.  The horns are the same as the wimpy ones found on Series V and VI Minxes.  Some Series VI owners have retro-fitted the larger and louder horns supplied up to Series IIIB.  At the front of the heater box is a manual control for water flow; there is no Series V type remote control inside the cabin.  Oil filter is the concealed Ryco R2121P element used up to Series IIIB, rather than the Z10 disposable canister used on Series V and later models.  Radiator is the tall narrow item used on Series IIIB, because the whole car body is the same.  Thermostat housing and flange are also the same as IIIB. 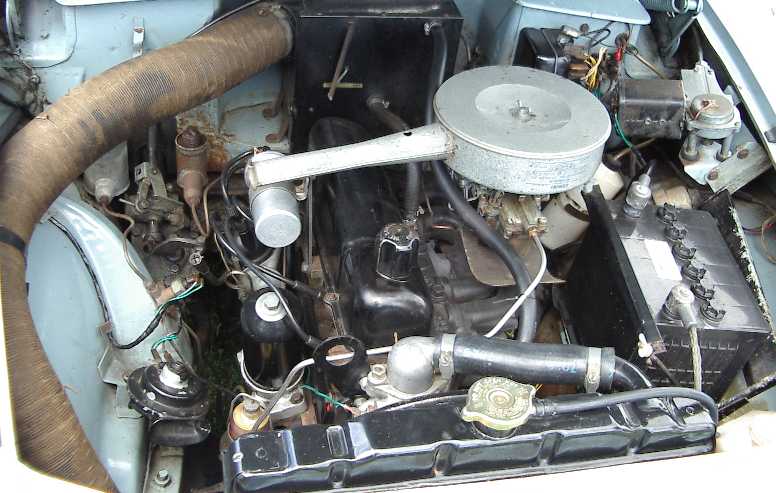 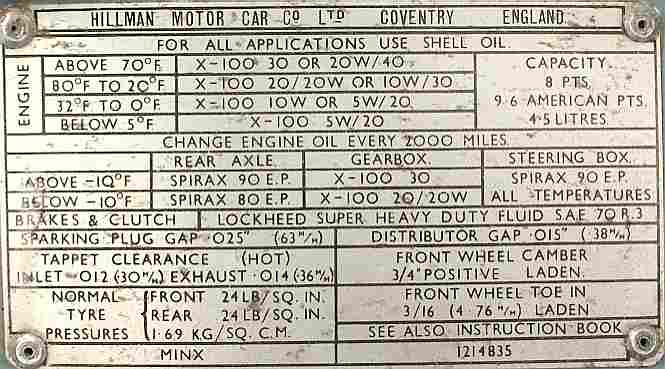 This wind deflector has been a popular accessory in Australia over the years, because the driver's window is wound down most of the time while travelling. 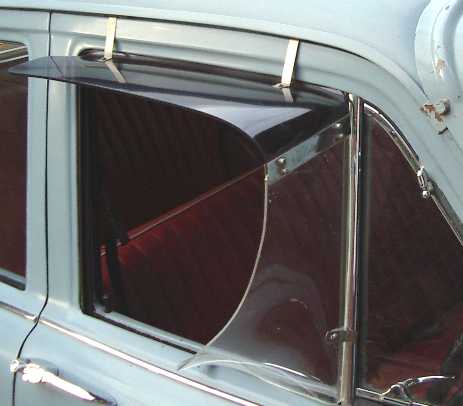 Interior:
The original red vinyl linings and upholstery look about 1 year old, although the carpet over the gearbox hump has completely worn down in patches.  Floor coverings (fitted black rubber mats in the front; red uncut carpet in the rear) are in fantastic condition.  Brake and clutch pedal rubbers have been replaced.  Painted surfaces are the same Windsor Blue as the exterior. 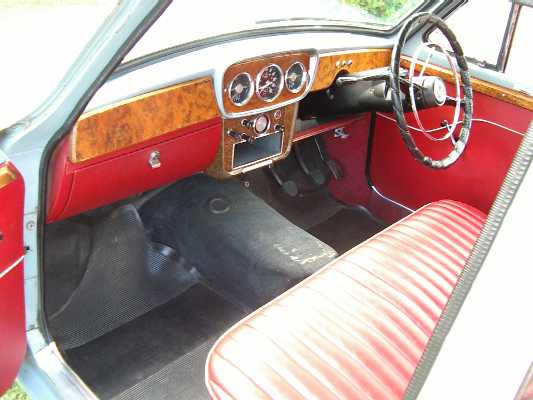 The Australian De Luxe features continue  column gear change, a fashion of the era.  Ironically, this makes gear changes tediously slow.  I much prefer the floor gear change fitted to the Special model.
The rear doors have armrests which interfere with the hand during window winding.
Screw holes above the De Luxe timber strip are a reminder that interior blinds were fitted when the car was delivered in 1962. 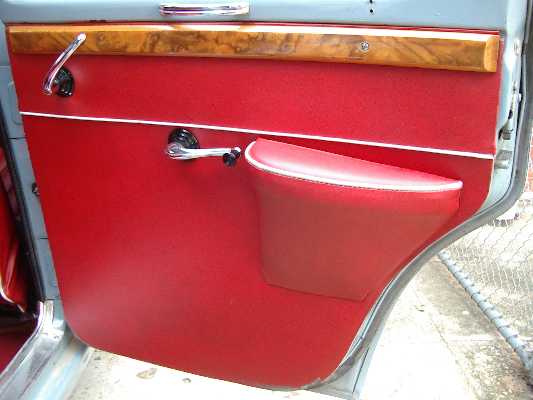 The De Luxe walnut grain dashboard is in excellent (but not perfect) condition.  If left in the sun, its plastic coating will crack, bringing the walnut veneer off with it.  Repeated exposure to water will have a similarly disastrous effect. (I know this because one of my Hillman Gazelles spent several years outdoors with a leaky windscreen rubber, before I bought it).
The motley dark brown panel below that (with the knobs and switches) is a plastic facsimile of timber grain. 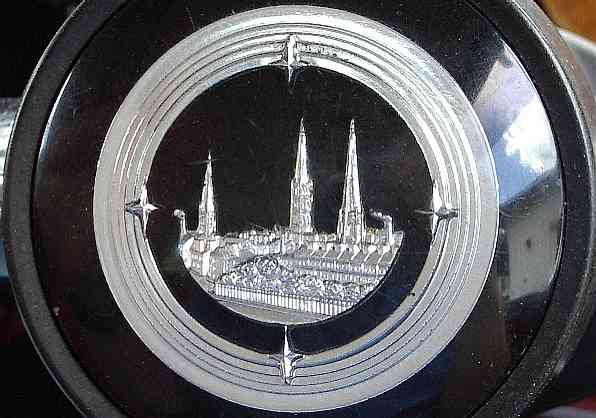 Coventry was the Hillman Motor Car Company's home town, and the Three Spires dominated its skyline.  Unfortunately, most of the city was destroyed by bombs on 14 November 1940 (22 years before this car was bought new).  The spires of Christchurch and St. Michaels, survived but not their lower parts.  The new Coventry Cathedral was consecrated on on 25 May 1962, shortly before the parts for this car would have been packed and sent to Australia as a CKD (completely knocked down) kit.
BACK to Brian's full story
FORWARD to the previous owner's story, by Ern Broughton
BACK to Gallery page