My first contact with Hillmans was early in 1966 when my parents bought a red Minx Series IIIA or IIIB De Luxe Estate Car (station wagon).  Late that year, Dad taught me to drive it in a quiet place, away from other people.  It was a nice vehicle; only the lack of synchromesh on first gear was a problem to the 12 year old me. 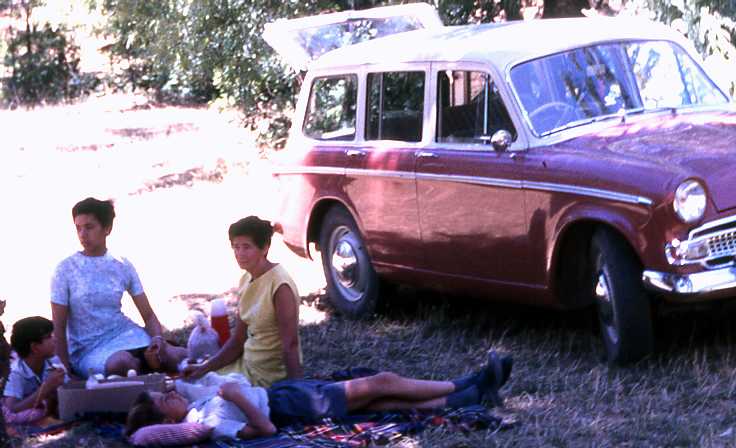 Above: our family hosted a Tongan visitor for a week.  (That's an 11 year old version of me, lying in the foreground).
By 1970, my brother and I had grown up, so Dad traded the Hillman in on a 1965 Ford Falcon XP station wagon.  The Falcon was very good, but Dad tried to buy the Hillman back from its new owner  no sale; the new owner liked it too much !

Early in 1972, I started studying at university.  Dad bought me a Minx Series IIIA (which I bought from him the following year).  I wasn't interested in automotive mechanics, but Dad told me that I could either maintain the car myself or pay someone else to do it.  He definitely wasn't going to do it all for me.  The outcome was simple: I had no money, so I learnt to do grease-ups and oil changes.  Several months later, water/oil emulsion was noticed on the dipstick  fortunately, the problem was only a rusted head gasket.  Dad didn't mind helping with the difficult stuff (like this one).

There was an "Automatic" badge on the boot, although it had a manual transmission (with a very long gearstick) that frequently jumped out of 3rd gear.  30 years later I discovered why.  The original transmission was a Smiths Easidrive  these were prone to serious failure, so many owners did this gearbox substitution.

Pictured below in 1973 :  me (on the right, in the blue shirt), my brother (who would not now be seen dead wearing a tie) and the Minx Series IIIA De Luxe.  The hair style (or lack of style) was fairly typical in that era. 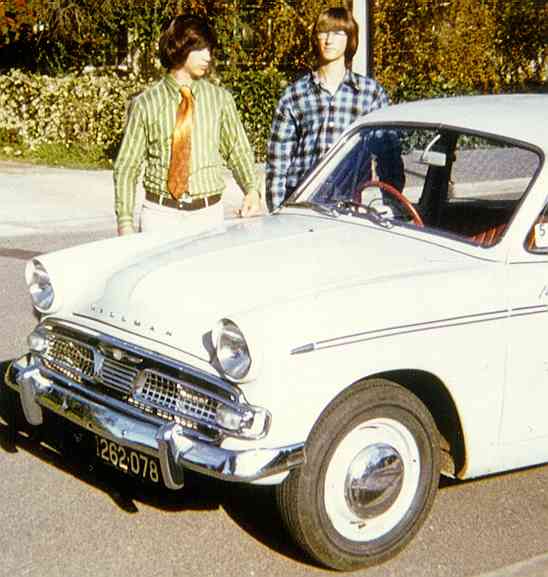 Pictured below, probably 1973 or early 1974.  We had 3 Minxes in the family :
Left  my parents' hack car (Series III)  severely worn in all respects, it struggled to build up oil pressure.
Centre  my Series IIIA.
Right  my parents' Series V  very mild-mannered and plain-looking, but neat, well-kept and reliable.

In May 1974 I pulled apart a rolled Minx Series II, to the last nut and bolt.  It had a heater (with airflow and temperature controls on the dash panel) and a blower  optional Smiths accessories in the late 1950s. These items were fitted to my Series IIIA, as was a towbar found in a car wrecking yard 15 miles away.
Dad fitted the dismantled car's engine into the hack car shown at left, above.  Even after that, "it couldn't pull the skin off a custard" (as people used to say).

By the end of 1974, my brother had rolled the Minx Series V.  Sometime during 1975, my parents bought a Hillman Gazelle (special Australian model, based on the Singer Gazelle Series 6 but with the alloy head engine) to replace the crashed Series V.  I very quickly discovered that the Gazelle had a lot more horsepower, and the 13 inch wheels mount wider tyres, so the car isn't so inclined to follow the road depressions made by heavy trucks. (Radial tyres also help a lot).

Early in 1976, my Series IIIA's engine/gearbox assembly was replaced by that from the wrecked Minx Series V.  This was a fairly simple swap, except that the body's gearbox hump wasn't tall enough to allow for the Remote Control feature on top of the Series V gearbox.  The solution: cut the gearbox hump out of the Series V body, and bolt it in to the older car.  The Series V clutch hydraulics were kept intact, because the earlier model master cylinder takes a smaller diameter pipe and thread.  The rear axle and differential set also became Series V several months later, when the old one began making annoying groans.  Another simple bolt-on job.  That increased the overall gearing by about 10%.  The 10 gallon petrol tank from the Series V was also fitted.  No physical problems, but the older car's fuel gauge showed more than full scale deflection when the tank was empty, so the Series V fuel gauge (matched to the sender unit in the tank) came into the action.

During 1985 I became tired of wrestling the old Minx with its narrow crossply tyres and high steering gear ratio, so I ceased using it.  Early in 1986, I bought a Hillman Gazelle which had been left out in the weather for many years before I bought it; the paintwork and interior had suffered a lot of damage from sun and rain (leaking past the windscreen rubber).  Instead of the proper alloy head engine, it had a Minx donk  probably something like Series III.  Before the middle of the year, it had so little oil pressure that it was barely useable.  The Series V engine was removed from my parked Series IIIA car, renovated slightly but not rebored (at 95,000 miles), and inserted into the Gazelle.  A few months later, the Borg Warner 35 automatic transmision was totally worn out, so it was fully rebuilt at great expense ($631).  I prefer a manual transmission, and had 3 good ones in the back shed.  However, the car body has transmission mounting points in the position for the longer automatic unit.  It seemed like a tricky welding operation to move them.
This car was still my regular work-horse until October 2000.

Early in 1988, Mum and Dad finally became tired of looking after old Hillmans, and committed themselves fully to BMWs, so my brother and I were given a Hillman Gazelle each.  I also got all of their spare parts (from 2 dead cars of the same model).  Later in 1988, a man approached me in the street, and offered me a partially restored Gazelle  he couldn't give it away. I took it, but still haven't done anything with it.
I had heard of the newly formed Hillman Car Club of South Australia (HCCSA), but due to many other commitments, was unable to get involved.

In July 1998, I obtained a work transfer to Germany.  Free of my previous distractions, I joined the HCCSA before leaving.  This enabled me to get the Gazelle onto Historic Registration so I could keep possession of the original rego number (8804).
Since my return to Australia in May 2000, I have been heavily involved in the HCCSA  Treasurer for 2 years, then Social Events Officer for 2 years.  Webmaster since October 2001.  The unsightly Gazelle has been a frequent participant in club runs  but not anymore  at least not until a full restoration, which might take several years.  My acquisition of the following classic (see next page) gives me some breathing space :