The original Bond Minicar was conceived and designed by Lawrence (Lawrie) Bond.  It was built in Preston, Lancashire by Sharp's Commercials Limited - a member of the Loxhams and Bradshaw Group of companies.  Production eventually commenced in January 1949.  This, the Mark A, proved very popular due to the post war economies and pioneered the 18 year production run of Villiers two-stroke powered Minicars.  Production finally ceased with the Mark G in December 1966.

The prototype Bond 875 was announced shortly after the 1963 Motor Show.  A complete 875cc Imp engine was used in a lightweight 3-wheeler with a fibreglass bodyshell.  The car's light weight (less than 400 Kg) enabled the low-compression (8:1) commercial version of the engine to be used with the cheaper 2 star petrol.  Rootes slowed things down with their concern over high running temperatures, but the car was publicly announced in August 1965.  Public attention was caught when racing driver John Surtees unofficially broke the equivalent saloon car lap record at Branch Hatch, attaining 100mph.

The shell consists of three mouldings: two bonded together for the main compartment and one is the bolt-on nose section.  The bonnet, engine lid, rear panel and dash panel are also glassfibre; the doors are aluminium.  It has a motorcycle fork in the front with leading arm, coil spring suspension and a telescopic shock absorber.  A Burman steering box connects this to the steering wheel. It suffers a bit from bump-steer and a lot from side-winds.  It left the factory on radial tyres: Michelin X.  The production Bond 875 claimed an impressive 16 seconds for the 0-60 dash together with a top speed of 80mph and 50mpg.  A 55mpg allied to a 50mph average was easily attainable.  It sold for £500 (windscreen washers and a spare wheel were optional extras).  For this price one had the excellent Imp engine, transaxle and instruments in a comfortable car that was good to drive.  Performance-wise, it was able to surprise owners of cars more obviously sporty.  It was a very innovative car.  However not all the little Bonds left the factory with a quality finish: water leaks, rattles, seat mountings tearing away, windows popping out...  Later a 'roof boot' was introduced, a padded lockable fibreglass case that clipped to the roof, using clamps fitted to the rain guttering.  Again, lack of quality meant the 'roof boot' was never attached very securely to some cars.  Few other accessories were available from Bond, who never seemed to 'push' the car.

The Mark 2 version was brought out in March 1968, accompanied by the slogan "How can you improve on perfection?"  The original 875 had opening glass side windows - these were soon deleted to save weight (and cost).  3-wheeler manufacturers had great difficulty keeping the weight down to 8cwt., which enabled the cars to qualify for motorcycle road tax rates, and be driven on a motorcycle licence.  Production slowed when Reliant took the company over and eventually ceased in March 1970 after some 3,400 had been produced.

Spike, our Bond 875, is a 1968 model, purchased by us in 1996 when we were on a posting to the UK.  We drove up to Barnsley in South Yorkshire, and bought him from a pleasant chap who worked "Oopt 'mill".  Spike had never been out of South Yorkshire in all of his 28 years, and traveled around the South of England with us until we shipped him back to wait for us here in Adelaide.  Along with Hillman Imps, he is not a great fan of Aussie summers, and we will fit a larger radiator and an electric fan.  We plan to restore him to as-new when the funds allow, and have started the search for helpers, especially those who can spray-paint on fiberglass. 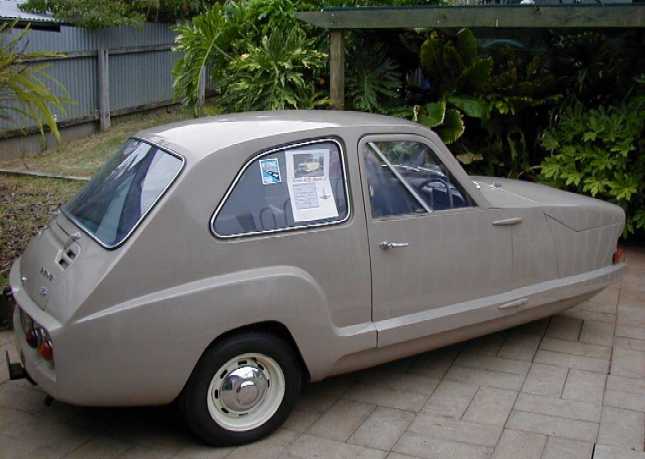