Peter Tavener and his wife Margaret live in the Adelaide Hills in South Australia.  They own two Rootes Group cars  a 1937 Hillman Minx Magnificent and a 1960 Hillman Minx Series IIIA De Luxe.

The first car Peter bought was a 1937 Austin Seven (you may say that he hasnt moved on much) and then a 1948 Standard Flying Eight Tourer, but in 1962 he acquired his first Hillman, a 1948 MkII Minx.  This was followed a couple of years later by a 1960 Minx Series IIIA Special, and then a brand new 1966 Hillman Gazelle.  Peter was doing his two years National Service at the time and needed something fast to travel from Puckapunyal in Victoria to Adelaide.

Following their marriage in 1969, Peter and Margaret decided to trade the Gazelle on a nine month old Hillman Hunter GT and kept this car for a couple of years, bringing both of their new born home from hospital in it.  The car unfortunately met with an accident in 1974 and that was the end of the Rootes Group association for a few years.  After a three-year stint of work in Darwin in the Northern Territory and moving into their current house in 1982, Peter decided that a second car was needed due to lack of public transport.  This time an Arrow.  The car proved very reliable but when a Hunter GT came on the market, the poor Arrow just had to go.  The GT was a great car and brought back many memories.

About this time an advertisement appeared in an Adelaide newspaper seeking people interested in starting a car club for Hillmans.  Peter jumped at the chance and became the inaugural Secretary of the Hillman Car Club of South Australia Inc.  This was in May 1988.  He held the position for five years, and then again for another two years sometime later.

In 1990, the Taveners became aware of a 1937 Minx for sale in Victoria, and a purchase price was negotiated.  In July that year they trailered the car back to South Australia and set about tidying it up and replacing a blown head gasket.  This work was carried out with the assistance of their son Robert, who was and still is very much involved with Rootes vehicles.  The car had been owned by the sellers' Uncle Arthur and so it now bears the name of Arthur.  Car space became a problem and so the Hunter GT was sold. 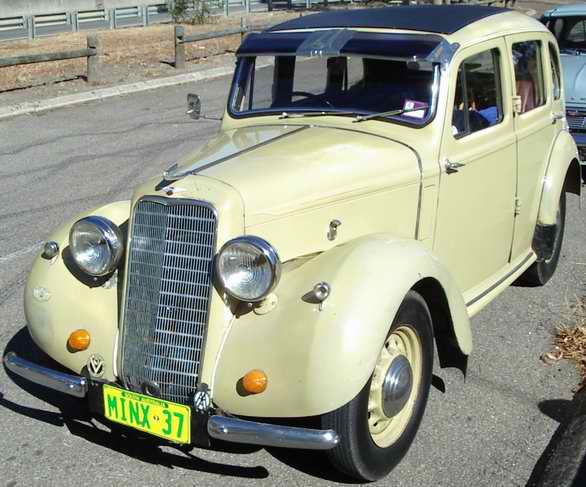 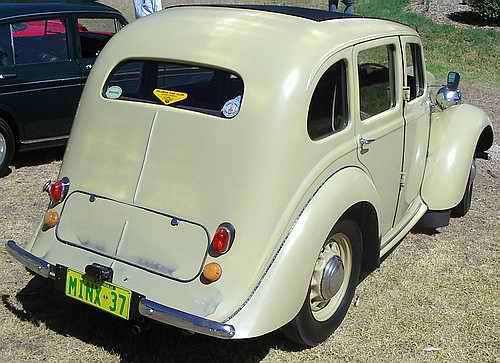 Arthur was entered in the 1990 running of the biennial Bay to Birdwood Run (the largest vintage car rally in the Southern Hemisphere), and completed the course.  It has participated in all but one of the events since that time.  The car has covered a little over 70,000 miles and has not been restored.  It is described as being kept in a maintained condition.  Arthur has attended all seven Hillman National Rallies.  At the two National Rallies where a trophy was presented for the Best Unrestored car, Arthur won on both occasions.

A 1961 Sunbeam Alpine Series II was purchased in 1994 in what was thought to be reasonable condition, but this proved to be incorrect.  In 1996 the overdrive unit failed and Peter decided to remove it to have it repaired.  A close inspection under the car revealed extensive rust in the cruciform and other parts of the body.  A professional restoration of the body was completed the following year.  The car proved to be most enjoyable but had one major shortcoming in that it had very little luggage room.  For this reason it was sold in January 2004 and a 1960 Minx Series IIIA De Luxe was acquired in May 2004.

Peter and Margaret with the Minx Series IIIA De Luxe 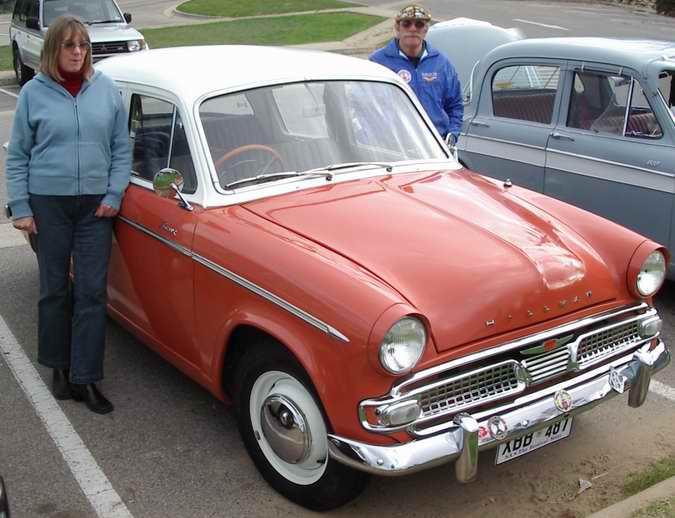 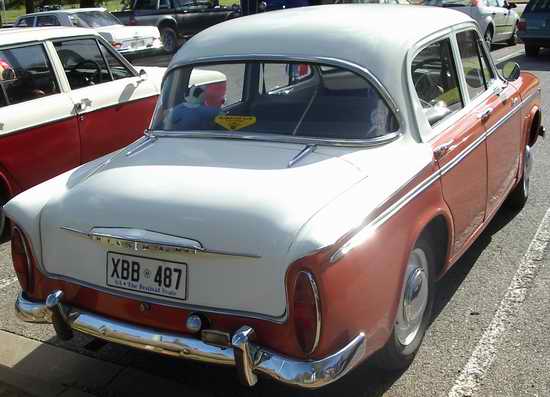 This car is virtually identical to the one Peter owned some years earlier, and whilst it requires some work to bring it up to scratch it will be a more suitable vehicle for longer trips including the next Hillman National Rally in Tasmania in 2006.

Margaret having been heavily involved in club activities since the club's inception in 1988, became a club member in her own right in 1997.  Together they have made many friends within the Hillman Car Club of South Australia Inc. and with members of interstate clubs.