On the 16th February 1987, (our eldest daughter's 18th birthday), I saw an advertisement in a four day old newspaper, a 1956 Hillman utility for sale.  I couldn't believe my eyes!  I rang the number and luckily the ute was still there.  I hooked a trailer on behind my Isuzu truck and raced up to Hahndorf, a little town in the Adelaide Hills, and after a little haggling I got it for $500.00.

I don't think I will ever forget the look of horror on Fay's face when I arrived home with "Hilda," as our youngest daughter Nicole named the car (after an Aunt who was old and dignified).  The car, which was full of rust and dents, went into the shed for almost a year, which was also about as long as it took Fay to get over the shock.

As found  very little paint left, lots of undercoat showing through, and rust in the usual places. 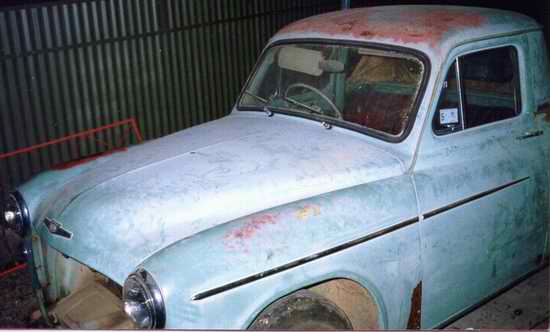 Then some panel beating followed by large patches of black and white paint.
Note the strip of rust at the rear of the cabin, in line with the bottom of the window.

It took me the next four years, cutting, swearing, welding, swearing, grinding and a little more swearing, to get the body work finished and painted.
Panel beating and dent filling done, ready to go to the paint shop.

(The finished item can be seen on the next page).

About two weeks before we were due to go to Mildura for the First Hillman National Rally on the Queens Birthday weekend in June 1992 I fixed the brakes, clutch, floor boards and started working on the motor.  On the Wednesday night, two nights before we were to leave for the Rally, the motor was still stripped.  You could look down through the block and see the concrete driveway underneath.  The following night, at around 9:00 pm, I took Hilda on her maiden trip, to the service station, and filled her with fuel and checked the tyre pressures.

The next morning, at 9 o'clock, without any door trims or lining at all in the cab, we set off for Mildura, about 250 miles away.  About ten miles out I thought to myself "I must be nuts!  What am I doing heading for Mildura in this thing?"  (Fay later said that she was thinking the same thing).  We arrived in Berri, with a little over half the distance to Mildura covered, at about four in the afternoon and booked into a motel.  The brakes hadn't been working all that well, so I dragged out the toolbox and the jack, looked at the car and thought "What am I going to be able to do here?", and put everything away again.

We left the motel quite early the next morning, Saturday, and Hilda seemed to be going a bit better.  And so she was.  All went well for the whole weekend, and on the way home to Adelaide from the Rally she seemed to fly, taking just six hours to cover the distance.  Over the years since then I have had the car upholstered, fixed the brakes again, overhauled the gearbox and fitted new clutch plates.

We have been to three Hillman National Rallies and three Cavalcades of Cars, and after the National Rally at Albury NSW in 1994, we kept going and travelled 2,000 miles, through to Canberra, Sydney, Cessnock, Katoomba and the Blue Mountains.  We then came back to Adelaide across the Hay Plains and Tailem Bend.  We absolutely tore past John and Marlene Wigzell, motoring sedately along in their 1927 Hillman 14, on the freeway just out of Adelaide, somewhere near Mount Barker.  John and Marlene had spent a week in Melbourne following the Rally.