Story by David and Michele, pictures by Brian Vogt and David

Our association with Hillman Imps began in 1993, when David found an Imp in our local garage in Freeling, South Australia.  This was a 1967 Mk II which needed a bit of work to restore it to its original condition.  Unfortunately because this car was used daily for work, restoration never began.  David joined the Hillman Car Club in 1996 where he heard about the GT variation and decided that he must have one.  Our GT was purchased from Canberra along with two spare Imps in January 1999.  The vehicle was in good condition although the motor would not start.  Restoration was delayed and finally began in September that year. 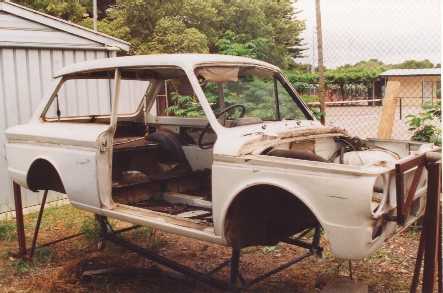 November 1999, partially stripped ready for all the paint to be removed

Originally the plan was to repair some very minor body damage to the drivers door, get the engine going and have the car in reasonable condition to enter the 5th National Hillman Rally in Cowra, N.S.W. in the year 2000.  The car was still in its original white colour with black interior, and even though we do not like white cars we decided to leave it white for originality.  That was until we saw a photo of a Hillman Imp Sport (GT) in the English Practical Classics Magazine.  This car, owned by one of the staff, was in the original Claret Metallic colour and was fitted with Superlite Mag. wheels.  The decision was made to strip the GT back to bare metal after quite a bit of bog was found in the drivers door.  So between Christmas and New Year, with temperatures of 35°C or more every day, we along with Micheles brother, stripped every piece of paint off the car.  It was finally delivered to the painter all primed on the 3rd January 2000.  We were three months away from the Rally.

The GT arrived back at Freeling on the 3rd March.  This gave us approx. five weeks to completely rebuild the car.  All non-working hours were spent in the garage to meet our deadline.  While the car was at the spray painters all of the suspension components were cleaned, sandblasted and painted with two coats of kill rust black paint, and brakes were overhauled with new parts.  Eventually the car came together, and the engine and gearbox out of our original Imp was fitted to save time to get the car to the Rally.

With approx. two weeks to the Rally the GT was trailered to our local motor trimmer for new carpets and a new roof lining.  As soon as the GT returned from the trimmers, it was off to Bob Janes at Gawler for the fitting of a new set of mag wheels and wheel alignment.  The GT now looked resplendent in her new Deep Burgundy Mica Pearl paint work and shiny Superlite mag wheels.

The weekend we were due leave for Cowra all that was left to do was to wash and polish the car and load it onto the trailer ready for a 3pm departure.  While Michele was at work on the Saturday before departure, David decided that he would connect up the interior light from the door switches. Unfortunately he almost burnt the GT to the ground when unbeknownst to him a part of one of the interior light wires short circuited with the body through some broken insulation and started to melt the wiring loom behind the dash board.  Smoke filled the car while David raced to the rear engine compartment and rapidly removed one of the battery terminals.  Fortunately these where only on finger tight and easily removed.  If David had to find a spanner to remove the terminal the result would have been disastrous!!!

The GT made it to the Rally intact and to our delight won the award for Best Imp.  The GT has also won Best Imp at the 6th National Hillman Rally at Deniliquin in 2002.  We actually drove our GT to this Rally and back home again.

Work continues on the interior where all that is need is the parcel shelf and repairs to the back seat.  We have fitted two Cobra Classic seats to the front for safety and comfort, along with new seat belts.  The steering wheel, which came with the purchase, and had never been fitted to a car, is a leather bound genuine English Mountey brand.  Front suspension is fitted with Spax adjustable shock absorbers.  The engine is GT specifications with Sport camshaft, twin Stromberg carburettors and an oil cooler. 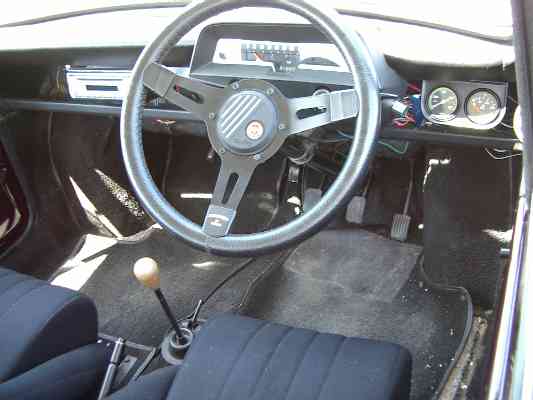 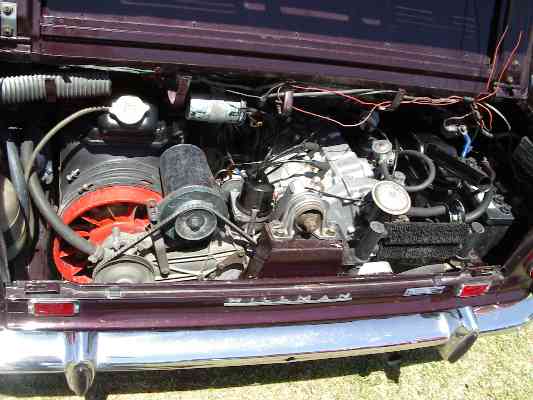 Michele and the GT at the Humber Club's 25th birthday in Fort Glanville, August 2002 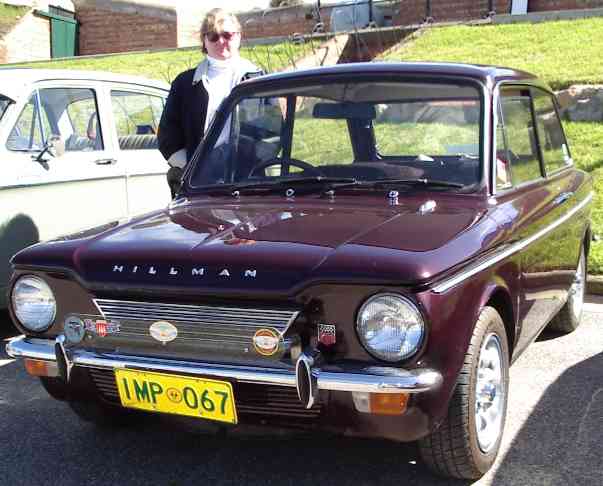