This is the story of Bill Waite and his 1949 Mark IV Hillman Minx.  At the time of constructing this web page in early 2003, Bill was 85 years old, and the Minx had always been his only car, still in daily use.  The Minx has covered well over 300,000 miles.  This story was originally written in about 1983, and published in "Hillman News" (HCCSA monthly magazine) in October 1999. 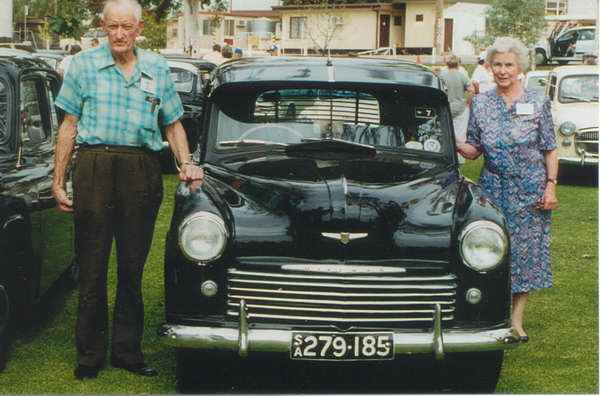 In May 1954 I purchased my 1949 Hillman Minx, then with 11,000 miles on the speedo, for 650 pounds, and was able to think about putting into reality a desire Id had for quite a while of driving to Perth via the Eyre Highway, which in those days was a real adventure few people attempted; the road or track being subject to many stories and tales to frighten the idea out of most peoples minds.  Friends who learnt of my intention to do the trip gave advice such as Your car will be a write off, Youll never make it, etc., etc.  Seeing I still intended to go more hints followed Take chains  shovels  many spare tyres  tubes  spare parts galore  watch out for Tiger snakes at Eucla and so on.  None of this advice was heeded except for tyre sleeves, tubes and sundry small useful bits and pieces.

So in September 1954 the first of the 16 trips to Perth and back was started, and having covered approximately 200 miles of bitumen from Adelaide to the start of the Eyre Highway and 300 miles of dirt road which varied from good to bad and corrugations we reached Ceduna early next morning.  A large signpost in the middle of the town read 490 miles to Adelaide and 1220 miles to Perth (of which over 900 miles was dirt road of very dubious condition) and made one wonder about turning back.

On we went and reached Penong, the last township for over 700 miles, petrol supplies in between being bought at sheep station homesteads, and with a gap of 330 miles between two of them.  The most barren part of the trip was from Nullarbor  Koonalda to Eucla, where there is only saltbush and bluebush.  Even 600 miles east of Perth there are still trees.

Many interesting happenings in that period during which the bitumen very, very slowly bridged the gap from Coolgardie in Western Australia to Port Augusta in South Australia.  The WA people got the road their side of the border done quickly and efficiently from Coolgardie to Eucla, but it was then many years before the SA side was opened in 1976, so in August 76 I had bitumen all the way!

After every trip with all its rough roads, long distances, heat etc., one would think Never again, but after a few months the urge to go again would return and plans would be made for the next trip.

During many trips one often detoured around the detours, and even followed the old telegraph line track to make progress.  Some parts were sandy, some were loose rocks and many were stony, but the limestone ridges where all loose material had blown away were really rough.  Corrugated sections which extended countless miles, and not to mention the cattle grids (the SA ones were the worst) which had be taken with care or else youd become airborne.  Holes and craters in the road often had a tree branch thrown in them to warn the motorist.  Bull dust holes one could see coming up by the different look of the road.  Just west of Madura in WA there used to be some beauties over 50 yards long, about 1 foot deep and full of rocks, and even to drive through at 5mph the dust would rise completely over the car and pour off just like water.  Every passing motorist waved happily to each other and often stopped to chat (except those in stolen cars) in the good old days, but not so today.

Between Nullarbor and Eucla many magnificent views of the cliffs on the Great Australian Bight with their sheer drops of over 300 feet down to the ocean and extending out of sight can be seen.  Blow holes can be viewed just east of Eucla. At Koonalda Station, approximately 60 miles east of Eucla, a detour of 3 miles off the Highway takes you to the Koonalda Caves, which Ive visited often.  They are immense, and 400 feet below the surface one comes to fresh water which is pumped up by petrol engine to water the sheep.  Explorations in boats have been carried out down there.

Down the Eucla Pass to the gigantic sandhills which covered the old settlement of Eucla, but in later years this sand has moved several miles east, leaving the old township area practically fully exposed.  Also to see was the old jetty at Eucla, of which only the framework is left.  The new road bypasses this.  Both Eucla and Madura had a graveyard of vehicles that didnt make it across.

On one early trip a female passenger, who had been told of the Eucla Tiger snakes, retired for a nature call into the scrub near Eucla, exposing a nice tender target for a March Fly to attack, which caused a wild yell in the belief that a Tiger snake had struck! (March Flies have a one inch wing span, land undetected and then a beaut sting).  One trip met a car load of Yanks driving a low slung, softly suspensioned American car and they said Well ah reckon weve graded the road for miles.

West of Balladonia and a short distance off the road one could visit Afghan Rocks, which is about 5 acres of granite rocks with large depressions in the middle which gathered a large volume of water when it rained.  Water is precious out there.  The said Afghan was shot for washing his feet in the water.  Newman Rocks nearby is another massive slab of granite.

1974 was the wettest trip when the still dirt road between Nundroo and Eucla could almost have been named the Eyre Canal.  Water right over the road  what a mess.  Things to miss on these trips were kangaroos (the big red ones stand about 6 feet tall), wombats, sheep, cattle, camels and emus.  My score: 1 wombat  result a bent bumper and left hand mudguard, and a number of very near misses of kangaroos.

I have made 7 of the trips by myself, the Hillman is comfortable to sleep in.  One early trip I had a young Uni lad for company, and getting along nicely way out in the middle when terrible metallic grinding noises started, which gives one a very deflated feeling so far from anywhere.  We stopped, checked everything underneath, could see nothing wrong so I gingerly drove along by myself.  No noise.  Uni lad got in and noises started again.  Eventually found a stone wedged in the tail shaft tunnel above the tail shaft.

On several occasions I have gone via Norseman, Esperance and Albany and through the magnificent timber country in the south west of Western Australia with its wonderful wildflowers, and gone down the many caves in that area.  Many interesting things to see in the old gold mining towns of Kalgoorlie and Boulder but especially Coolgardie with its fine old buildings and relics of days gone by.  An old chap runs a general store, with many brands of petrol and diesel fuel, extending almost 50 yards along the street.  I have been seeing him on every trip and he always puts his hand on the Hillman and says Good car youve got there son. (He once owned a Hillman).  On my trip in 76 I said Arent you ever going to retire? as he seemed old in 1954.  He said Im 86 and Im going to live for ever.  He has gathered many relics of the prosperous mining days and has a large outdoor museum next to his store.  I have also visited Hyden of Wave Rock fame on my way to Perth.

Car problems on these 16 trips have been: 3 punctures; several dented wheel rims; 1 windscreen broken near Ceduna in SA (replaced at Ceduna within 2 hours) and I used a perspex shield after this; 1 muffler shaken to bits (tied it up with wire); 1 air cleaner loose (wire handy again); 1 rubber shock absorber linkage gone.  Between trips I have had to replace several rear wheel bearings (noisy due to bad roads) and despite all the critics said, the mighty Hillman purrs along as good as ever.

Modifications have always been a petrol tank shield. For a period I had a 3 gallon petrol tank in the engine bay (now reduced to 1 gallon); extra leaf in rear springs after several trips; extra cooling for engine as a lot of trips were made in December with daily temperatures over 100 degrees F.  With the coming of better roads and the speedier travelling the motor was inclined to run hot.  On my last trip back I covered the 569 miles from Perth to Balladonia in the one day, which was pretty good going.

Very cold and heavy dew at nights out in the middle, and on two occasions had ice on the windscreen in the morning.  Could relate more of the early trips and amusing incidents.  I have photos and slides of a lot of it but I have written enough.

Today modern Hotel Motels are all along the excellent bitumen road, with the biggest gap being approximately 130 miles.  How things have changed!

His Shed
a poem by Bill Waite
BACK to Gallery page