Why a Hillman?  I was asked.

Later, in the mid 1970s, Ralph, Eric (Ralph's brother) and I were approached by Kevin Fischer of Murray Bridge and Kevin Drage of Globe Racing in Adelaide to build and race a 2 litre class car for BATHURST.
As if we could say NO!  In 1975 we entered an RS 2000 Escort.  We were unsuccessful that year but in 1976 we won our class  "FISCHER RACING TEAM."
We continued racing at Bathurst for another two years with a team from Sydney  "Fury Ford" in a V6 Ford Capri.  In the 1970s and 1980s while our families were growing, we put racing into mothballs, but never lost interest.  When the late 1980s came along, Ralph was bored so he bought an Austin Healey 6 which had lived most of its life at Broken Hill, so you could imagine how many dents from roos and rocks, the body was a mess  full of pop rivets and bog.  Ralph asked for my help after stripping it down to the chassis.  We rebuilt the whole car  what a job!  A combination of steel outer guards and aluminium inner, rust in doors and floor pan.  This was a time consuming job and took 3 years to complete (beautiful finish though).  So, Hillmans aren't the only cars with rust!

After spending a lot of time working on other peoples' cars, I decided with Eric that we would look for a secondhand small coaster bus and convert it to a camper, so one was bought from Bute.  This was also full of rust (nasty word) on the roof from the mounted water air-conditioner.  It also took about 3 years to complete.  Also turned out splendid and gets a lot of comments.  Having said all that, I was looking for another project, one for myself.  Having known Russell Gill all my school and teen life at Pennington, and his knowledge of all types of cars including Vintage, we would go to all the Bay to Birdwood runs together and comment on all the cars saying to each other that we would get one day.  Well, Russell got his Hillman and would call in to our place at Woodside whilst on a Hillman run.  He looked as if he was having lots of fun along with Beverley  so I decided to get a Hillman!  Having seen an ad in the paper at Pennington for two Hillman Gazelles, I thought "this is my chance."  After seeing them, they were not pretty, I can tell you!  One had no motor but a good body.  The other motor was going without gearbox, so I bought them.  On taking them home, the wife was not impressed  too much work.  So the hunt was back on.  Another ad in the paper at Seaford.  Had a look, but no clutch.  The motor was sound and body was straight with plenty of rust but 100% on the others. It was trailered home to join the others in the backyard.

Knowing how long other projects took, I decided to get into it quick smart.  Doors off, trim and seats out.  Rust out of corners, then the boot.  Rust welded patches in the rear guards, fuel tank out and cleaned, rust on door seals, then front guards (renowned for rust).  Having done all this in 3 months, I was doing pretty well.  In the meantime, I joined the club and went on runs with primed spots all over the Gazelle.  The time had come to paint, so what brand?  Acrylic or 2 pack?  I spoke to an apprentice at work who had just painted his Statesman and I was impressed with the finish.  After talking to young Brett he came up to my place to have a look and took the job (told him all the experience helps for later!)  It took one weekend.  Saturday, rub down and prime.  Sunday, colour on.  Couldn't wait for Monday  putting back all the strips, windows, doors and seals. Next the seats were re-trimmed and repaired.  Seat belts in front.  Picked the best of the bumpers from the backyard.  New carpet of course!

After all was assembled, the end result was very pleasing.  Not taking any chances, re-built front disc brakes and new exhaust system, new tyres but still not happy!  Something wrong  the grille was dented and scratched and did not look the part.  While taking a trip to a friend's place at Tiddy Widdy near Ardrossan, we decided to take a drive over to Port Vincent and behold, there was a Gazelle begging to go home.  So in I go and ask.  Came out with a smile.  It was motor complete and 4 speed.  Same upholstery and a "manual" and best of all, a good grille.  A week later Russell, a friend and myself trailered it home to my collection.

Some months later Russell and Beverley decided to get their Minx painted by my young friend Brett who did mine.  Another project in my shed to remove dents and rust  good job done!  To my surprise, I noticed another Gazelle in the paper at Lonsdale. I took a look and I was amazed at the condition of the grille  so another one in the yard!  I did put this one on my car and am quite happy now.
In October 2003 the company I worked for 50 years came to an arrangement for me to retire.  So now I have retired to my shed, "the house of Hillmans."  So after 50 years of cars, buses and trucks, what will be the next project?  Well, my son in law bought a 1952 Bedford 30 cwt. truck with rust and dents so that's what was next!  Another good job done.  Proud of myself, painted this one. 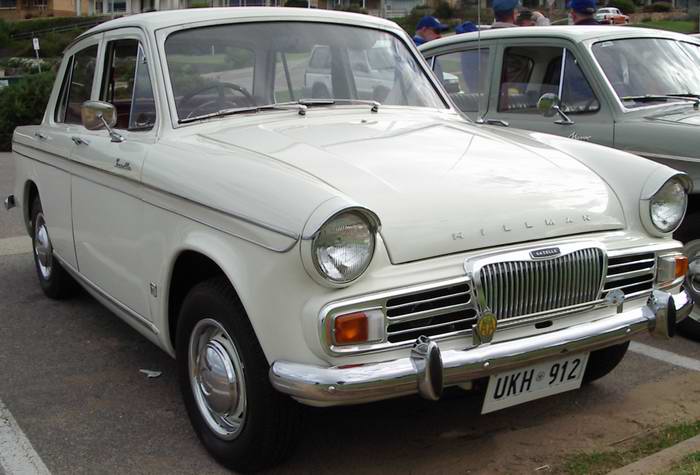 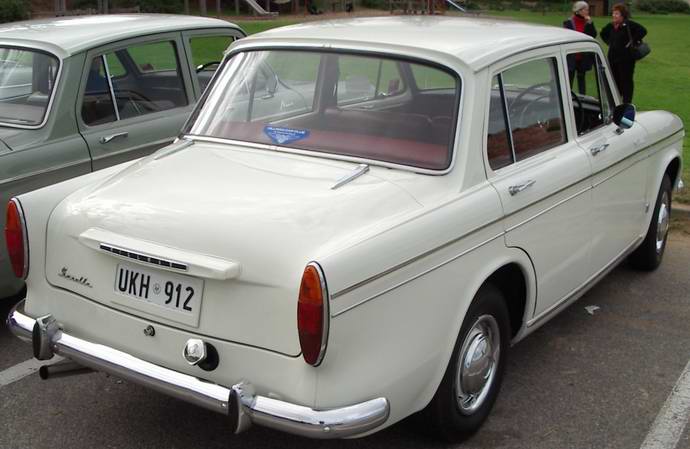 Editor's note:  The Hillman Gazelle was a special model assembled at Port Melbourne by Rootes Australia.  Based on the Singer Gazelle Series VI, it boasted 85 brake horsepower nett (an extra 15 bhp over the iron head Hillman Minx and Singer Gazelle) due to the aluminium head engine built for the Sunbeam Rapier model.  As this was the only model ever badged "Hillman Gazelle," Rootes Australia never assigned a series number to it.
Picture below:  The broad, flat air filter obscures the rear of the engine bay.  Solex B32 P.A.I.A.S carburettor has a 24 mm primary throttle (butterfly operated from the accelerator pedal) and a 26 mm secondary throttle (vacuum operated). 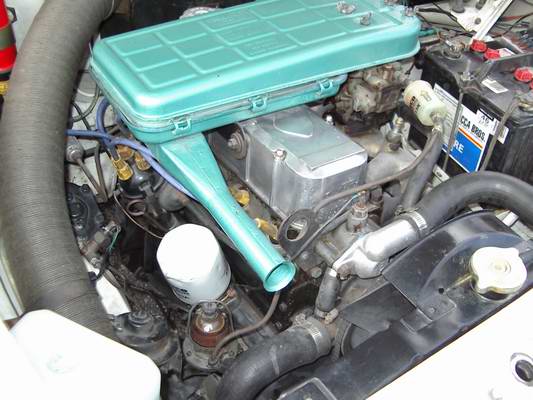