Mr. Minx began life as a tired pink and white series IIIA deLuxe.  I bought the little old Hillman in 1987 when I was only 15 years old with the intention of readying the car for when I learnt to drive.  I originally wanted a Morris minor but at $400 for a wreck they could keep it, so when the Hillman was found (and I had Hillmans explained to me by Dad) it was purchased for $225.  The idea was to teach me (with the help of Dad) about cars, how to maintain them, how they work, and supposedly how to look after them.  With this the car was stripped of the engine and this was given a freshen up with new rings and bearings.  The body was patched up and given a backyard coat of paint (dark blue) so I didnt have to drive around in a pink car.  The interior was given some floor mats, seat covers and a new hood lining.  The wheels were standard with tiny little tyres that when pushed would easily break traction or come away from the rim, but it was fun and indeed taught me the finer points of car control.  Soon I discovered that the stud pattern of the wheels was the same as a Ford Escort, so off to the wrecker to find some mags.  On they went and didnt that liven the beast up, now I could corner without falling over.  So at this point in time the modifications began. 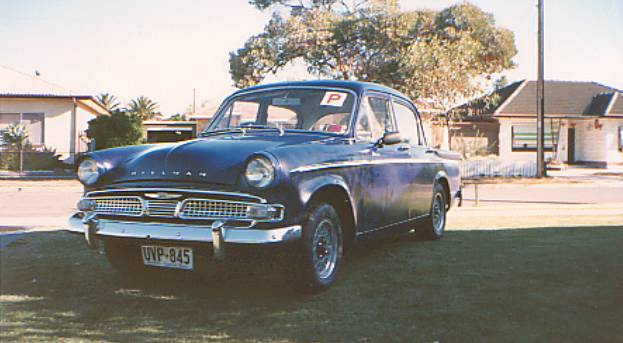 I drove the car for several years to school and later college for a number of years, until one day in 1990 I returned to my car to find a Hillman Car Club Of South Australia calling card stuck on the windscreen.  I gave the number a ring only to get hold of one Peter Tavener, but I still joined the club and very soon met a lot of friends I still have today.  I ventured out on every possible club rally and had a ball until I became a little tired of the poor old Minx.  With the help of Robert Tavener, a 1725 alloy headed Gazelle was located and retrieved (not without many difficulties, but that is a different story), stripped in the front yard while my parents were on holiday, and the unwanted pieces dumped.  The engine was stripped and again only freshened up as was the front end, gearbox and diff.  This was all placed into the old Minx body along with the fuel tank and gauges.  Hunter bucket seats were also put into the car to make it a little sportier.  This all worked out very well; it drove like a dream, was fast, stopped well with the new disc brakes, and handled just as good.  But it still looked rather ordinary.

With the club planning the first national rally, it was decided that I would give the car to someone that knew how to paint cars and I would have a clean tidy, good looking, good handling, comfortable car to drive around on a daily basis.  WRONG!  The car looked so good when I got it back from its bare metal, two pack respray in midnight blue that I couldnt drive it every day, so it became a shed car (a car that is only taken for a gentle stroll on weekends).  The car and I went to the first national rally in 1992 and came home with the "Best Modified" trophy. 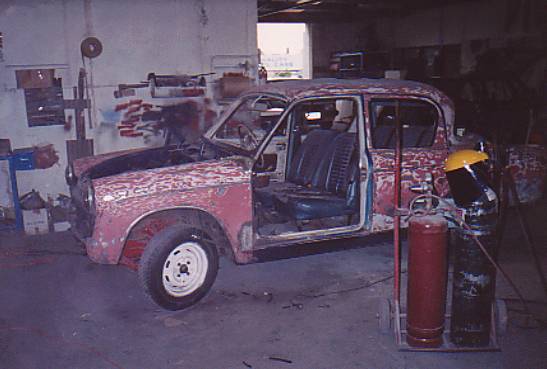 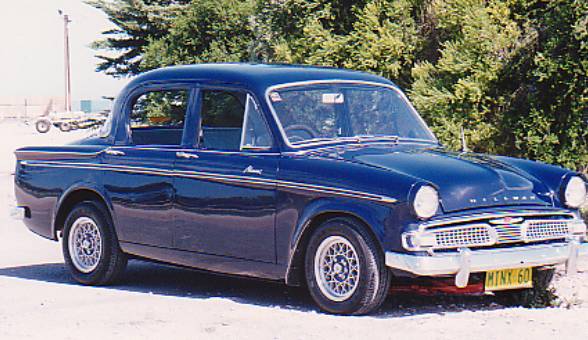 The bug had now bitten and it was not long before the interior was retrimmed with a custom look, new mags were sourced, and a spare bonnet had some flutes cut into it.  The car stayed like this for several more years during which time it was seen on the streets most weekends at club runs or any other excuse to take the covers off.  In 1994 at a local car show, the car was seen by the writers of "Fast Fours & Rotaries" who ran a story of it in their magazine.

Around 1997 it was time to do some more improving.  The car was completely stripped, the underside of the car cleaned back to bare metal and painted in black body schutz.  The suspension was completely rebuilt with custom polyurithane bushes, pads and bump stops and lowered 1.5".  Everything was chromed, painted or powder coated, and carefully reassembled.  The diff was thrown out and replaced with a custom shortened Toyota Hi-Ace diff and rear brakes.  The front brakes are all new standard Gazelle discs.  The engine received some work also, 0.060" overbore, flat top pistons, Hunter GT head flowed to 450 hp, Wade camshaft (the biggest they had done), fully balanced and blueprinted, 12:1 compression ratio, twin 40mm Weber carbs on a custom billet intake manifold, custom extractors with stainless steel custom twin system, Ford V8 pressure plate, ceramic button clutch plate, again all painted, polished or chromed.  This was backed by a rebuilt Gazelle gearbox and a Holden Commodore tail shaft made to fit.  It was originally intended to fit a five speed Toyota Celica box but the tunnel was too small so the original had to stay. 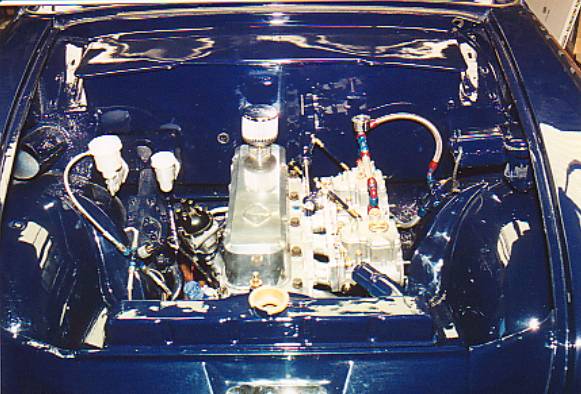 The interior was tricked up with new Sparco sports steering wheel, Sparco pedals and Momo gear knob plus a full set of Autometer racing gauges just to set things off.  A CD player, amp, sub-woofer and six speakers were also thrown in.  The boot now features a 45 litre fuel cell which only ever contains Avgas (100-130 octane intended for propeller engined airplanes), the electric fuel pump (as the mechanical pump would never flow the fuel needed through the half inch fuel lines to the regulator), and a truck battery with 850 cranking amps to really spin it over.  The spare wheel is now mounted where the tank used to be and is operated by a small winch. 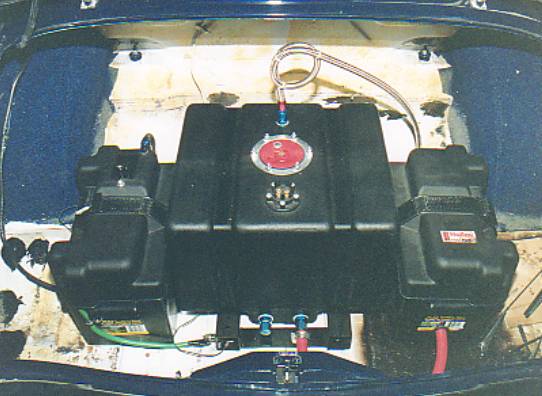 The body essentially remained as was, with a few changes to the engine bay including removal of the heater box and the hole where it once sat filled, as is the battery mounting point.
Every piece of bright work was re chromed, all the light lenses were new, all the rubbers new, door catches chromed and anything visible painted or chromed. 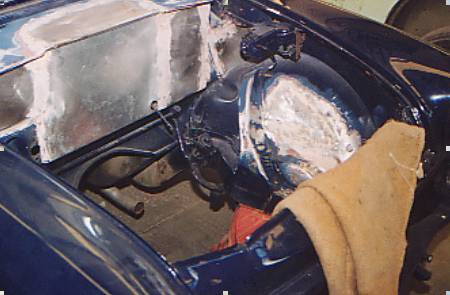 Goodbye mag wheels, and hello stockies.  Well almost, the rears are 7inch wide steel rims and the fronts 5 inch with rechromed hubcaps and wheel trims.  Tyres are 205/50/15 on the rear and 185/55/15 on the front.  The rims are painted to match the car in midnight blue.
The car was completely rewired, with as much wiring as possible hidden from view.  There is also a Crane ignition system and pointless ignition.  This combination multiplies the original spark by ten and if it bites you, it will put you on your knees, I know from experience.  10mm spark plug leads to keep the spark in and colder than normal NGK spark plugs.

That basically is how the car is today, low, loud, and very different.  So different that Hot Fours magazine after spending $600 on a photo shoot, declined featuring it in their magazine as it was too left of field, bad luck for them.  The car to date has been in three car shows and has come home with a trophy in the top elite class on each occasion.

The power output of the car is unknown.  When on the chassis dyno, doing the final power test, the gearbox did not like what was happening and stopped turning, but this is fixed now and another date with the dyno is on the cards for the not too distant future.

Next, enjoy the show scene for a while, some hill climbs, regularity races, motorkanas, and then some more work, maybe a supercharger and a flame job, just a mild flame job in a darker blue.  Only time will tell.

Although most of the work was done in the home shed, many people must be thanked for their help, support and ideas.  Also there are a lot of businesses out there that deserve a mention as they helped me and are willing to help anyone who asks.

See you on the streets. 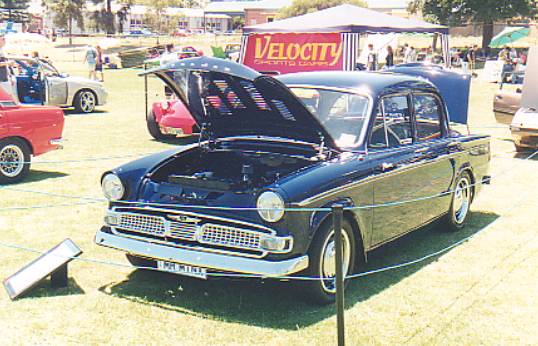 BACK to gallery index page