Roy is a 1962 Hillman Minx Series IIIC Australian DeLuxe Sedan, in unrestored original condition.  Mr. Roy and Mrs. Olive Dunstan from Gawler, a country town about forty kilometres north-east of Adelaide, were the previous and only owners and it is after them that I named the car Roy, preferring that to Olive.  The Dunstans bought the car brand new from Withers Garage, the Authorised Rootes Group Dealer, at Gawler South on 24 November 1962 for the cost of 995 pounds, plus accessories costing 29 pounds 7 shillings and 9 pence  a total of 1024 pounds 7 shillings and 9 pence, less 250 pounds trade-in for a Standard Sedan. 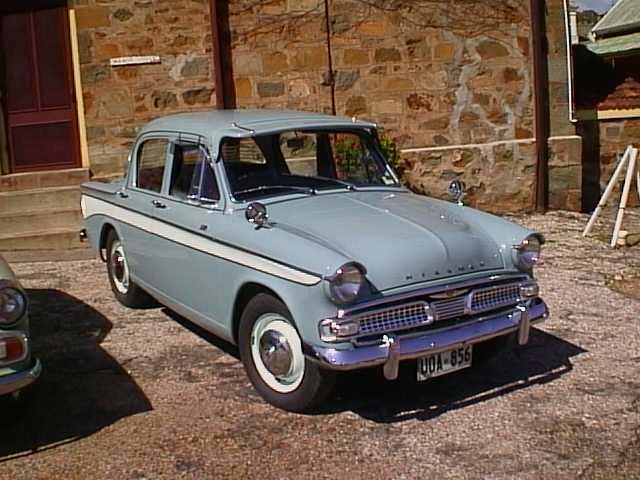 Ian Kitto, our Hillman Car Club treasurer in 1997, put me on to Roy after he had seen the car advertised a couple of times in a local trading newspaper, and I bought it, complete with books, full service history and 35 years worth of receipts, from the Dunstans niece on 23 September 1997.  The general condition of the car when I inspected it was good for its age, and it was fitted with a rear interior venetian blind, an external sunvisor, mudguard mounted rear view mirrors and internal pull down blinds on each rear side and front passenger side windows.  The exterior was good with very little rust, and all chrome strips were there and in good nick.  Bumpers, grille and over-riders were dent-free and with the chrome plating in good condition, but only one hub cap was OK.  The five crossply tyres were all badly worn.

The interior was excellent with the seats, floor coverings and door trims in mint condition but the rear windows did not wind up or down.  There was no rust in the doors but they were rattly, and the furflex around the front doors was worn out, and the lens for the interior light was missing.  Seat belts had been fitted to the front only, and the odometer reading was 81,365 miles.  The inside of the boot was very clean and there was no rust, the boot floor mat was in good condition and the original tool kit was intact.

Under the bonnet, things were encouraging.  A new radiator and battery had been fitted very recently (probably to sell the car), the heater was still connected to the water circuit so must be OK, but the water pump or gasket was a bit suspect, with signs of water weeping from around the pump base.  The battery tray was badly rusted.

We went for a short road test.  The doors, door glasses and a hundred other things all rattled, the tyre pressures felt too high, the steering was good but there was a lot of slack in the accelerator linkage.  The engine idled poorly, laboured a bit, it did not run freely at all and popped and backfired on the over-run, and there was obviously a hole somewhere in the exhaust pipe although a new muffler had been recently fitted.  The clutch took up at the extreme end of pedal travel, the car didnt fall out of gear although there was a pronounced grating noise when engaging reverse, and the brakes were fair enough.  The front shock absorbers were US and the rear springs were saggy.

I drove Roy home and a couple of days later started to get him into serviceable condition.  Firstly I tightened the loose manifold bolts and nuts, replaced a missing 21/2 x 5/16 UNF bolt at the rear of the manifold, tightened the carburetter flange nuts, replaced the rubber tube joint on the carbie-to-distributor vacuum pipe, and adjusted the mixture screw.  The backfiring was now almost gone but I suspected that I would need to replace the carbie economy device diaphragm or possibly the manifold gasket at some stage.  I removed the battery, painted the battery tray with epoxy/bitumastic paint and made a rubber pad to go under the battery.  Fitting a clutch master cylinder repair kit improved the clutch action.

A few days later I was showing my friend Len Macdermott how well the engine ran when a loud knocking noise started coming from the front of the engine.  A heart-in-mouth examination revealed that the starter dog nut was loose and the bottom pulley was rattling.  With relief I tightened it using the starting handle, and tapped the tab washer over.  Next I checked the timing and found it set on top dead centre.  I reset it to about 7 degrees before TDC using a timing light.  On test the car ran much better; no pinging on full throttle uphill indicated it could do with a little more advance.  Ian Kitto and David Watson, our club spares officer, supplied me with better hub caps, and I also bought a couple from an ex-HCC member.

A new exhaust system, five new Firestone 165SR15 tyres, new front shockers and greasing the front suspension made a huge difference to the car.  The next job was to take up the slack in the throttle linkage, and while doing this I found the cause of the noise when engaging reverse gear; part of the gearchange mechanism was rubbing on the pipe from the clutch master cylinder.  I also fitted a new diaphragm to the carburettor economy device which further greatly improved the cars running.

Whilst installing a radiator coolant recovery bottle I noticed water weeping from around the water pump gasket area, and decided to fit a new gasket.  Just in case the trouble was more than a simple gasket replacement I bought a new Quinton Hazell water pump, made in the UK for Hillman Minx 1959-66.  I removed the old water pump and thermostat housing.  The pump seemed OK apart from a little roughness, possibly in the bearing rather than the seal, there was no bearing slack but I decided to fit the new pump whilst I had everything in pieces.  I found that the thermostat housing base was where the water was coming from; it was paper thin and holed, and had to be replaced before the car could be used again.  The new water pump was not a direct replacement, but was 20mm longer in the barrel, and while it fitted behind the radiator all right, I had to get a deeper bossed fan pulley.  Luckily Peter Tavener, our club secretary, had a couple of them.  I then fitted a replacement thermostat base, changed the electrics to negative earth, installed a pair of booster springs and lubricated the rear springs.  Roys rear end became much tighter and about 1.5 inches higher.

On 26 December 1997 we had an HCC Run, and Roy went really well.  A day or so later I took off the door trims, fixed the rear door window winders and gave all doors a dose of fish oil and sound deadener.  Towards the end of January 1998, I replaced the carburettor needle and seat, and replaced the flasher can for the turning indicators; the old can was the original, dated 4/62.  Several more HCC runs followed, along with a lot of daily usage, and Roy was a delight to drive.  Over Easter that year we went to Mount Gambier for the Fourth National Hillman Rally.  683 miles round trip, used 20 gallons (92 litres) which is 34.15 miles per imperial gallon (28.43 miles per US gallon).  Roy used no oil or water, and ran very sweetly.

We have attended many Hillman Runs and Rallies in South Australia and interstate, and covered 12,000 miles in the car, all of it without trouble.  The trip to the Sixth Hillman National Rally at Deniliquin in New South Wales at Easter 2002, plus a few extra days touring Victoria, added 1,000 of those miles to the total.

Roy was sold to fellow HCCSA member Brian Vogt on 25th January 2003, after Ern had purchased a very nice
Humber Vogue from his brother Roy Broughton.